The Finnish city of Lahti has an ambitious goal of being carbon neutral in 2025, 25 years before the general target of the European union. This industrial city in Southern Finland stopped burning coal in 2019. Next, the focus is on traffic emissions.

As international climate negotiations seem to have come to a halt, and many countries are struggling to commit to climate actions, individual cities have taken an active role on the front line of climate work. One of the forerunners is the Finnish city of Lahti, which is the European Green Capital in 2021.

Recent emission calculations show that the City of Lahti has already managed to reduce its greenhouse gas emissions to less than half of the level of the reference year 1990.

In Lahti, which has a population of 120,000, annual greenhouse gas emissions decreased by as much as over 690,000 tonnes of carbon dioxide equivalent (CO2e) between 1990 and 2019. This corresponds to 135,000 return flights from Helsinki to Bangkok.

The reason for such rapid emission reductions is the change in district heat production. Lahti abandoned coal burning in 2019, and the new bioenergy heating plant replaced the production of the old power plant in the same year.

Lahti will be carbon neutral in a few years

Lahti has set itself the ambitious goal of being carbon neutral by 2025, which is 10 years ahead of Finland’s national target and 25 years ahead of the EU target. Among other EU cities, for example, Copenhagen, the capital of Denmark, is aiming to achieve the same as Lahti in Finland.

In order to achieve this target, Lahti must produce 80% less emissions than in the reference year 1990.

The city from Southern Finland estimates that its emissions in 2021 will already be 70% lower than in 1990. Figures for 2020 are not yet available.

”Lahti is a real forerunner among European cities, as there are only plans elsewhere to stop using fossil fuels. We’re well underway. However, there is still work to be done in order to reach the target in 2025,” says Aino Kulonen, Environmental Coordinator of the City of Lahti. 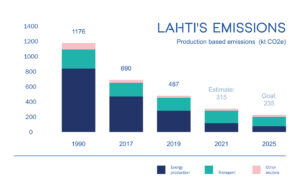 Lahti’s annual greenhouse gas emissions by sector in 1990, 2017 and 2019, as well as the 2021 estimate and the 2025 target. The figures are based on production-based emissions in the Lahti region converted into CO2 equivalents (Source: City of Lahti).

In 2019, energy production still caused more than half of all emissions in the Lahti region, but when the burning of coal ended, traffic will become the biggest source of emissions. The city aims to reduce traffic emissions while making mobility smoother for the city’s inhabitants.

Among others, Lahti improves the attractiveness of public transport, increases the use of electricity and biogas in motoring, and improves pedestrian and bicycle path networks. The city cannot directly influence all traffic emissions in its region, though the EU’s transport policy, such as emission limits for new vehicles, will help Lahti achieve the goal.

Other climate actions in Lahti

● Lahti has invited its citizens to engage in climate actions with the CitiCAP app, for example, which citizens can download to mobile phones and with the help of which people could save money through personal carbon trading by leaving the car at home.

● Lahti has drawn up an extensive list of measures to adapt to and combat climate change. The programme has 100 points and covers all sectors of the city.