Uncompromising vegan lives and breathes his convictions, guiding others towards a sustainable lifestyle - Lahti
1,5 degree lifestyle

Uncompromising vegan lives and breathes his convictions, guiding others towards a sustainable lifestyle

The worldview of Lahti-based entrepreneur Teemu Almén centres around veganism. For him, it is the absolute principle to protect animal rights, health, climate and the planet. 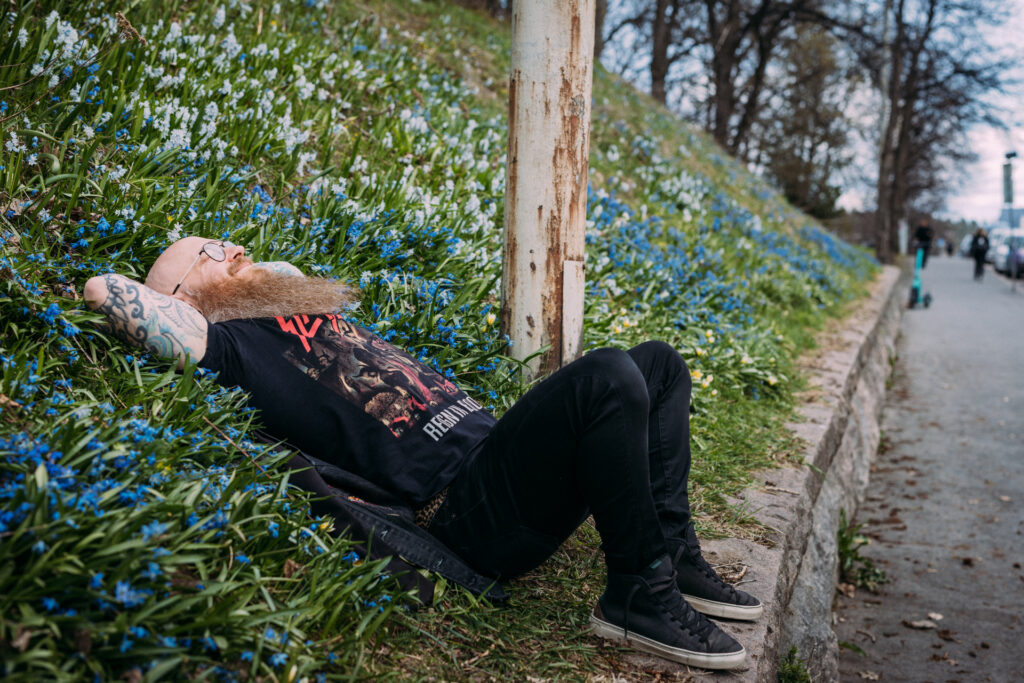 The outward appearance of Teemu Almén already says a lot about the man. The tattoos covering his skin reflect entrepreneurship as the owner and studio manager of a vegan piercing and tattoo shop. His body, trained to tip-top shape, exudes health and strength. T-shirts express his love for metal and hardcore music.

Almén makes an equally strong impression with his outlook on life: he is adamant in his principle of veganism.

“For me, the key idea behind veganism is the absurdity of killing animals – that is, sentient and thinking beings – for food”, Almén summarises his beliefs in empathy and non-violence.

“Producing food of animal origin is also wrong because it requires a huge amount of land and water, as well as erodes the Earth unsustainably. If we destroy our planet, there is no planet B to escape to”, Almén notes.

“What we eat has a major impact on the planet’s well-being, or lack thereof. Eating is either a saving or a crippling force for our planet. With plant-based food, the Earth would be enough for us.”

“We eat every day. By choosing vegan food, everyone can contribute to the well-being of the planet on a daily basis. Each meal and shop visit is a choice and a vote by the individual. Few understand their influence and power.”

Awareness was kindled in Lahti

Almén moved from a small rural town to Lahti as a young man who had embraced traditional teachings about animals and food. In the urban throb of the city, he encountered new people, different ideas, organisational activities and the animal rights movement.

“Everything was new here for a country boy, and my thinking changed dramatically. Animals having a right to life was the first thing to come to my consciousness. Next, my thinking expanded to the health benefits of vegan food and further to the environmental and climate impacts of veganism.”

“Lahti opened my eyes, and I have chosen this city as my home.”

Every vegan choice makes an impact

Even though Almén himself eats strictly vegan food, he stresses that even one vegan meal for each person is a step in the right direction.

“Nobody is perfect. There are still few of us who are completely vegan. For most people, a gradual transition to vegan food is best.”

When asked, Almén is happy to guide consumers on food choices and, at the gym, other workout enthusiasts on vegan nutrition.

“Vegan food improves everyone’s health and is perfect for all sports, including bodybuilding. You do not need a huge amount of protein in sports, and you can get enough of it from vegetables. Many feel that they recover faster with plant-based food. In addition, meat and dairy products have been linked to many serious illnesses in studies worldwide”, Almén explains.

“I am an advocate for a cause that is beneficial and reduces suffering. Through individual people, I am making the world a better place”.

Share:
More articles
Bioneeri service puts biowaste collection within reach of householders
"We are always talking to our children about a sustainable lifestyle to make them realise that these choices genuinely affect their future."Forest Workstations in Lahti Fostering Connection to Nature
"Lahti offers diverse and peaceful nature sites, and that is the city's greatest asset."Electric city bikes make Lahti a real city
"Cycling as a green form of mobility, in turn, allows me to promote a sustainable lifestyle in everyday life and in my free time. The city bike system provides more options for this.”  Football star sets an example by eating vegetarian food and living sustainably
"An environmental friendly lifestyle follows me from the football field into everyday life. As a professional player, I wish to set an example for others to make sustainable choices." 1.5-degree lifestyle has given a good life and rewarding job
“I think that the everyday choices are the most important factors in achieving the 1.5-degree goal – that means the actions and omissions of individuals.”
All articles

All
Home
Work
Freetime
On the go
While eating
Show more