The multifaceted artwork to be erected in Kansalaistori Square, Helsinki between 6 and 15 August reminds us how water levels are rising as a result of climate change. The melting ice poles, infographics and pavilion provide an opportunity to learn about important facts about climate change. The artwork called I.C.E. – Indisputable Case of Emergency is created by Lahti, the European Green Capital, which for its part is making a rapid transformation into a carbon-neutral city. 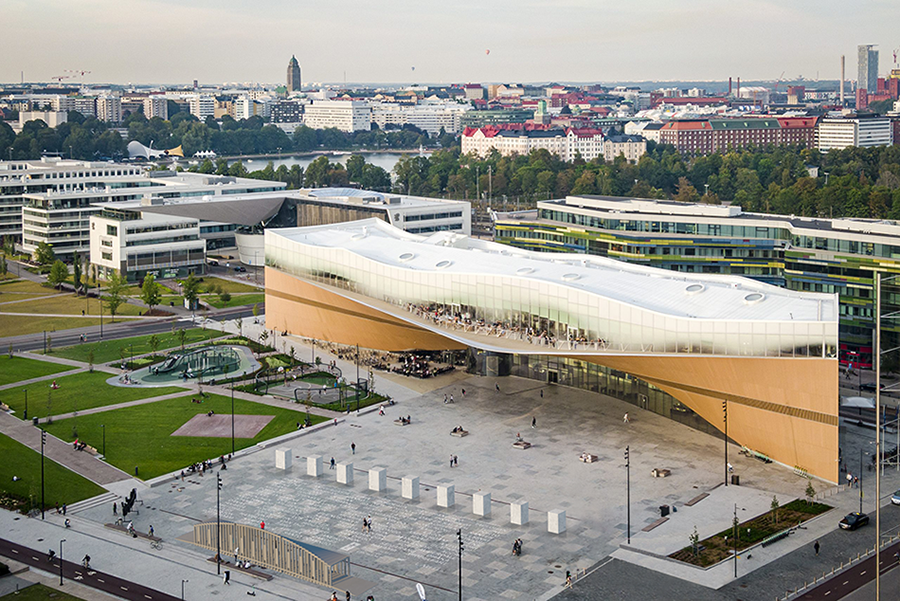 Rising sea levels threaten to overwhelm several coastal cities by 2050 and 2100. The global problem affects not only distant places, but also domestic coastal cities from Oulu to Kotka.

The artwork on climate change, implemented by the European Green Capital Lahti, will be on display in Kansalaistori Square in Helsinki from 6 to 15 August 2021. The melting ice poles of the work are a reminder of the dangers of climate change: the water flowing into the square, on the other hand, of the constantly rising sea level.

The infographic on the ground allows viewers to learn the facts in more detail and see which cities are first threatened by climate change. One part of the work is the wooden pavilion, where you can explore the green capital and climate solutions in Lahti.

At the same time, a piece performed by a carbon-neutral symphony orchestra is heard at the square

The premiere of composer Cecilia Damström’s new ICE musical piece will play in the background of the artwork, performed by the Lahti Symphony Orchestra. The harmony of the work, which begins with peaceful harp playing, escalates into a chilling discord in the 10-minute piece, and the rhythm roars intensely: this is what it sounds like when our planet Earth fights for its existence.

“The piece shows the threat that climate change and the collapse of ecosystems pose to glaciers that have stood for thousands of years. Underpinning the composition is the Earth’s heartbeat, fighting for survival, and ultimately alarm signals take us back to the moment when it is still not too late to save our planet,” says composer Cecilia Damström.

The title of the piece refers to both the Arctic sea ice decline and the In Case of Emergency (ICE) programme. The piece ends with a glimpse of hope: in the final seconds, the harp heard at the beginning is played again and a small bell rings as a reminder that there is still a chance to influence the future.

The work is part of the Lahti Green Capital Year. Pekka Timonen, Mayor of Lahti, believes that the problems related to climate change will be solved by collective force.

“The climate is in an undeniable state of emergency. Cities play an important role in halting climate change: the majority of Europeans live in medium-sized cities. As the Green Capital, Lahti is setting an example towards a more sustainable future by cutting emissions from energy production, transport, housing and other consumption to achieve its carbon-neutrality target for 2025,” says Timonen.

Erkko Aarti and his agency AOR Architects were responsible for the design of the work. The wooden pavilion was constructed by Lahti-based Ebonia Design, the ice elements were created by Snowhow Oy and the infographics were designed by communications agency TBWA. Several partners are involved in building the work, such as LUT University, Marjatta and Eino Kolli Foundation, Tiina and Antti Herlin Foundation, Climate Move and Tunne ry, Häme Chamber of Commerce, and a number of businesses contributing to the European Green Capital project.